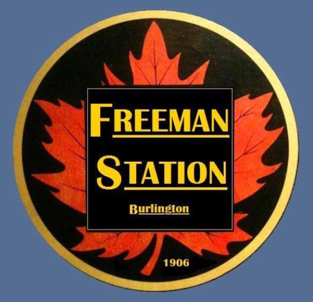 The Freeman Station, formerly the Burlington Junction Station of the Grand Trunk Railway, located in Burlington, Ontario, was constructed in 1906 and is considered a fine example of buildings of that era. It has been recognized for its architectural and historic significance by the Historic Sites and Monuments Board of Canada, the Ontario Ministry of Culture and Heritage Burlington. This is Burlington’s only surviving Grand Trunk Railway station, following the loss of the Aldershot GTR station. Now familiarly called “the Freeman Station”, after the hamlet in which it was built, it was formerly signed the “Burlington Junction” or “Burlington West” Station.

From 1854 to 1988 this location was Burlington’s railway arrival and departure centre. Passenger trains connected residents of Wellington Square, later Burlington, directly with Toronto, Chicago and New York. In wartime, soldiers left from this station on the first stage of their journey overseas. Marching bands and hundreds of their fellow citizens walked with them to the station to bid them farewell. After the Second World War, many emigrants from Europe arrived at this station to make a new life in Burlington.